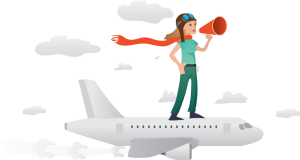 Ever met a stranger in the street/café/on a train and they became a lifelong friend?

I’ll always remember that grey freezing day when I met my friend Stu from New York on the Heathrow Express in London at 6.13am.

The train was about to depart. My eyes were glued shut in anticipation of the  15 minute blackout I could catch on the way to the airport.

Then the announcement: “Ladies and Gentlemen. This train is now cancelled. Please make alternative arrangements”.

And at exactly the same moment, we cursed the same curse. Nothing bonds two people more securely than a love of swearing.

We immediately teamed up, called a cab, and talked all the way to the airport.
Stu is now one of my most treasured friends, and my husband and sister love him too.

That’s just one example of spontaneity playing its sweet role in my life.

I’m on my way to the voice over conference in Atlanta this week. The days will be packed with learning, observing, absorbing. I can’t wait.

But I’m particularly excited about who I might meet, and hope that quite spontaneously, I might make a lifelong friend.