Authentic British and American Voice Over 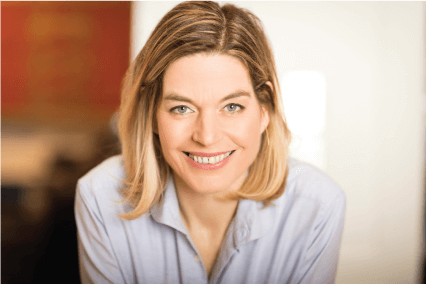 Classic and crisp, Daisy’s vocal style has a natural authority and has been described as sophisticated, approachable and trustworthy. She can bring lightness and humanity to a heavy subject. Clients enjoy getting treated to the choice of her native British accent or American accent. They also love her customer service, in which their requests are responded to with bespoke care. They’ve said working with Daisy is ‘a true pleasure’, and ‘fun and easy’. She can’t wait for you to have an equally pleasurable and seamless experience.

Born into a family of writers, Daisy grew up in London and New York. As an ‘unaccompanied minor’ on transatlantic flights she chatted with everyone she met including a mafia boss who wowed her with his stories and accent. In an attempt to outsmart her brilliant parents she studied Russian, which they could neither speak nor understand, gaining a degree in Russian Language and Literature. Exposed from an early age to eloquent storytellers with a strong vocal presence, Daisy was ultimately drawn to the art of voice acting.

Daisy studied theatre at Royal Central School of Speech and Drama in London, attended the Lee Strasberg Institute in New York, has taken classes in the Meisner Technique and is currently having a blast studying Improv at Upright Citizen’s Brigade. VO coaches include David Rosenthal, CEO of Global Voice Acting Academy, Thom Pinto for Documentary and Broadcast Narration.  Her craft is also supported by her many years practicing and teaching the Alexander Technique, a renowned tool for actors.

24-48 hours or sooner, depending on project and availability

Files in the format of your choice (WAV, MP3, AIFF etc) & delivered by email or FTP

Daisy is easy to work with, fun and creative, efficient, and knows what to do with direction. The fact that she is equally accomplished at American and British English is a huge plus, as she can single-handedly span multiple markets.

David Rosenthal
CEO, Global Voice Acting Academy
Daisy’s voice made a real difference, blending the right accent with an engaging tone of voice and very clear instructions, which brought the final result to perfection. She provided us with a great range of options from the start and thanks to her dedication, flexibility and high professionalism, we could create together the best interpretation very swiftly.
Elodie C.
Director, Real Ease
Daisy Tennant goes above and beyond to ensure high quality of work that all parties are happy with. She was extremely accommodating and flexible.
Anthony K.
Account Manager, Futurism
Daisy is the person I love being in the trenches with. She is always “on top” of the project with immediate action being taken. You can trust her with your project. She will get you exactly what you are visioning.
Larry Hudson
Voice Over Heaven
We were looking for a British female voice talent for a recent project and were very fortunate to find Daisy Tennant.  She was the exact feel and sound we were looking for, and when it came to the VO session, it couldn’t have gone any smoother.  Daisy was incredibly easy to work with, took direction very well and was professional along with having a wonderful personality.  It was a true pleasure to work with Daisy, and we look forward to working with her again.
Rick M.
Director of Sound, Falcon's Creative Group
Last year I was searching for new VO artists and struck gold when I met Daisy. It's such a joy to work with her! Not only is she a total professional at doing her main thing: being a talented, dedicated VO artist; she also operates her home studio skillfully, responds quickly and has an understanding and humor that clients appreciate. Plus, she's become a good friend, and that makes work a lot more like play!
Rob G.
Chief Audio Engineer, IBM
Even though we were in different time zones, Daisy was always quick to respond and easy to communicate with. She delivered high quality VO with little direction and made the whole process smooth and painless for us at Slinky Productions.
Scott L.
Slinky Productions (Video Production Company)
Daisy is an absolute pleasure to work with. I know I can rely on her as a member of the team for good turn around times for my clients and agents.
Tanya B.
British Voice Over UK
Working for the first time with Daisy on an animation, I’m delighted to say that she was lovely to work with from start to finish. I wouldn’t hesitate to work with her in the future.
Zoe Boanas
Producer, Digifish
work together